END_OF_DOCUMENT_TOKEN_TO_BE_REPLACED

The Hélicrab is a new staircase design patented by Entrepose Échafaudages which provides an ideal solution for access on building sites. Its small footprint (1.5 m x 1.5 m) means that it can be set up in confined spaces and it is easy and safe to use.

END_OF_DOCUMENT_TOKEN_TO_BE_REPLACED

The Aulnay branch has been working on site at the Hôtel de Crillon since December 2013.
The initial contract was for scaffolding work on the whole of the façade overlooking rue Boissy d’Anglas (1872 m2, facing the US embassy), around the two courtyards (3364 m2) and for the construction of a 2900 m2 temporary roof for the entire building.
Since then, the Aulnay branch has installed several complementary structures such as: working platform, various stairways and access cranes, as well as the scaffolding to support the tarpaulin hiding the Algéco site facilities modules, which has just been replaced by a decorative curtain depicting how the front of the hotel will look once the work is finished.

The renovation to the northern façade of the Opéra Garnier will take place in 3 stages, each lasting 9 months.

Once again, Entrepose has been selected to design and install the scaffolding on this prestigious monument. The Aulnay branch has installed 1670 m2 of scaffolding for the stage 1 work. 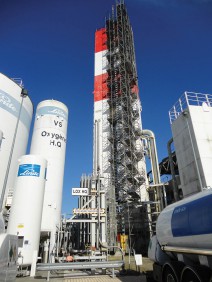 The Toulouse branch has installed this 54 m high access scaffolding for the renovation of the insulation to a nitrogen tower on the Linde Gas site, Toulouse.

24 tonnes of Multicrab have been used in this structure, which includes a lift for site staff and equipment and safety stairways.

END_OF_DOCUMENT_TOKEN_TO_BE_REPLACED


For the unit shutdown works on the Total La Mède site, the Fos-sur-Mer branch has installed a walkway connecting the refinery to the site facilities that house staff from a variety of subcontractor companies.

The Toulouse branch is providing the scaffolding for the coping improvement works and the restoration of the windows at Albi cathedral. The highest scaffolding platform is located 41 metres above ground level. The bell tower rises to 51 metres. This restoration work is due to last until the start of  2015.

END_OF_DOCUMENT_TOKEN_TO_BE_REPLACED 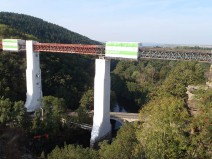 For blasting and repainting work on viaduct’s steel structures, the Nantes branch has designed and erected scaffolding to the bridge’s two piles (45 m and 50 m high) and three mobile scaffolds (8.00 m wide and 8.50 m high) erected on the apron. 160 tonnes of Multicrab was required for these structures.

END_OF_DOCUMENT_TOKEN_TO_BE_REPLACED

Since 1758, the Hôtel de Crillon has lit up Paris with its grandeur and magic. The hotel currently closed for total renovation that will take 2 year. It will open its doors again in 2015.
This masterpiece of 18th century architecture is undergoing major work to meet its guest highest expectations. The renovation will enhance the nobility and elegance of the site whilst retaining the spirit of this prestigious building.

END_OF_DOCUMENT_TOKEN_TO_BE_REPLACED

After four months’ erection work, the 450 tonnes of scaffolding is in place.
This monumental scaffolding sits on a bridging scaffold. All of the supports used during erection have been removed so that the temporary roof now stands only on the imposing 315 tonne metal structure, which rises to a height of 37 metres high and is installed on 17 metre deep micropiles that act as foundations.

Since 2012, Entrepose has been operating on various civil engineering elements of this huge project.

Bonded prestressed beam road bridges (PRO PRAD)
This methodology has been in used for several years, due to its speed of implementation.
Entrepose is carrying out the design and erection of the shoring of the piles that will carry the prestressed beams in the 15 road bridges in batch N°8.
Each bridge requires between 25 and 30 tonnes of equipment, including access stairways and perimeter decking to each pile, for the installation of the beams. Depending on the loads, and to meet the tight schedule, we have used various types of shoring equipment.

END_OF_DOCUMENT_TOKEN_TO_BE_REPLACED
See all of our products
Services